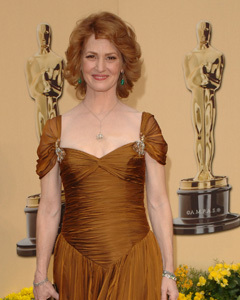 No, we don’t mean from the sight of recent “AMC” alum Amanda Seyfried (ex-Joni), star of the musical hit “Mama Mia,” singing on stage, but didn’t Best Performance by an Actress in a Leading Role nominee Melissa Leo look familiar?

The New York born and raised actress earned her 2008 Academy Award nomation for the critically-acclaimed film “Frozen River.” Leo takes a star turn playing the role of a working class woman who turns to illegal immigrant smuggling to make ends meet. “The New York Times,” The Hollywood Reporter,” “The Los Angeles Times,” and “The Miami Herald,” were just a few of the prestigious publications that listed “Frozen River” among the Top-10 films of 2008. For her work in the lead role of Misty Upham, Leo was honored with acting nominations from the aforementioned Academy Awards, the Screen Actors Guild and the Broadcast Film Critics Association; she took home the Best Actress award from the Independent Spirit Awards and a Spotlight award from the National Board of Review.

Long before “Frozen River,” Leo starred on the ABC daytime drama “All My Children.” At the time, Leo beat out a young actress by the name of Julia Roberts for the role of Linda Warner. Showing early signs of being a captivating actress, Leo quickly earned a Daytime Emmy nomination for the role she played from 1984 to 1985. (Leo wasn’t the only Oscar nominee with daytime ties on Sunday night, Supporting Actress nominee Marisa Tomei, “The Wrestler,” started her acting career on CBS’s “As the World Turns” in 1983). Before taking the Oscar spotlight, Leo was probably best known for the role of Sgt. Kay Howard (1993-1997) on NBC’s “Homicide: Life on the Streets.”

At an awards show where it is truly a huge honor and recognition just to be nominated, Melissa Leo didn’t walk away with the Oscar on Sunday. Kate Winslet, star of the largest-grossing film ever “Titanic,” took home the award for her role in “The Reader.” The other nominees in the category were Meryl Streep (“Doubt”), Anne Hathaway (“Rachel Getting Married”), and Angelina Jolie (“Changeling”).