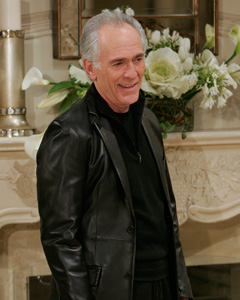 (SoapOperaNetwork.com) — They say daddy knows best, but when daddy tries to kill you, it’s best to get the hell out of the way.

Fathers are supposed to protect their daughters, but not if you’re Anthony Zacchara and your daughter is mob princess Claudia Zacchara. During the Week of February 23 on ABC’s “General Hospital,” look for Anthony (played by actor Bruce Weitz) to hold his daughter, Claudia (Sarah Joy Brown), hostage via gunpoint and a bomb while trying to get his way. Unfortunately for Anthony, he gets captured and hauled off to federal prison on Monday, March 2, which also serves as Weitz’s last airdate as the former mafia kingpin.

Weitz joined the cast of “GH” in the role of Anthony Zacchara in October 2007 only to leave in November 2007 after Anthony was carted off to the insane asylum. He later returned in January 2008, when Sarah Joy Brown returned to the drama series as a new character – Claudia Zacchara, daughter of Anthony, thus cemeting the Zacchara’s as Port Charles’ new premiere family. Brandon Barash portrays Weitz’s onscreen son, Johnny Zacchara, on the soap. Both Barash and Brown remain on contract.

Prior to joining “General Hospital,” Weitz appeared in such shows as “ER,” “Judging Amy” and “Sisters.” In 2008, he appeared in an episode of CBS’ “CSI: Crime Scene Investigation.” He can currently be seen as Larry in the straight-to-DVD comedy “imps*,” along-side 35 other Award winning Hollywood stars.