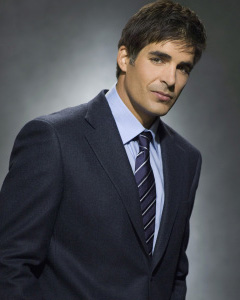 “10 Items or Less” is an improv comedy series taking place in the fictional Greens & Grains supermarket, where New York City businessman, Leslie (John Lehr), is forced to move back to his hometown of Dayton, Ohio and take over the family supermarket following the death of his father.

In the February 24 episode (“Sesquicentennial”) and third season finale of the series, Lesie offers customers of Greens & Grains 150% off of their purchase in celebration of the 150th Anniversary of the supermarket. Realizing his mistake, Leslie adds a catch that states that customers must dress in period-era attire during said purchase. Meanwhile, Ingrid (Kirsten Gronfield) meets Dave (guest-star Galen Gering), a polygamist on the prowl – only she doesn’t know that. Leslie, who secretly loves Ingrid seeks to expose the truth and his undying love for Ingrid.

The episode was written by John Lehr and Nancy Hower with direction by Hower and airs Tuesday, February 24 at 11:00 PM ET/PT on TBS.

Discussion: ’10 Items or Less’ for Gering