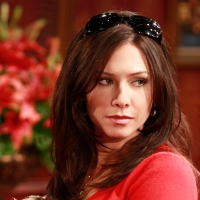 (SoapOperaNetwork.com) — While she portrayed the face of Carly Corinthos for five years (1996-2001) and won three Emmy Awards for her portrayal, Sarah Brown is ready to once again claim Port Charles and Prospect Studios her permanent home.

Nearly a year after re-joining the cast of ABC’s “General Hospital,” but this time as mob princess Claudia Zacchara, Brown has re-upped with the drama series for an additional year, bringing her time with the show through January 2010. Her one year contract with “GH” was due to expire in the coming weeks. She made her much lauded return to the soap on January 31, 2008, wherein her new character immediately had sex with Sonny Corinthos (portrayed by Brown’s former on-screen love Maurice Benard).

During her seven (7) year absence from the soap, Brown landed a contract role on CBS’ “As The World Turns” in 2004, where she played Julia Larrabee Jackson. The character was killed off in 2005. Soon afterward, she landed another contract role on the CBS crime drama “Cold Case” as Josie Sutton. Sadly, her character was written out after only a half-dozen episodes. Prior to her work on the “Case,” Brown made a number of appearances on CBS’ “Without a Trace.” Both series are executive produced by mega-producer/director Jerry Bruckheimer.

Brown got her start in television portraying the role of Kaitlin Star in the widely popular kids program “V.R. Troopers” from 1994-1996.