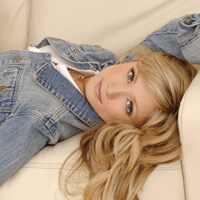 THIS WEEK ON: GUIDING LIGHT A Closer Look: Tactical Errors

Lizzie gets a motion to suppress evidence so the jacket cannot be used in court. Alan attempts to make Lizzie second guess her success. Doris refuses to put a persistent Lizzie on the stand until a private talk with Alan. Lizzie is ecstatic to learn that she’ll be able to testify on Bill’s behalf. Alan gets a pass into the courtroom after passing a bribe to the bailiff. Doris pulls out Bill’s jacket in the middle of Lizzie’s testimony. A mortified Lizzie leaves the courtroom after testifying. Doris assures Alan that he did the right thing by helping bring the jacket back into evidence. Lizzie visits Bill. Lizzie learns that Bill has been charged with kidnapping, fraud and assault, and faces upwards of 20 years in prison.
Angela Rosa