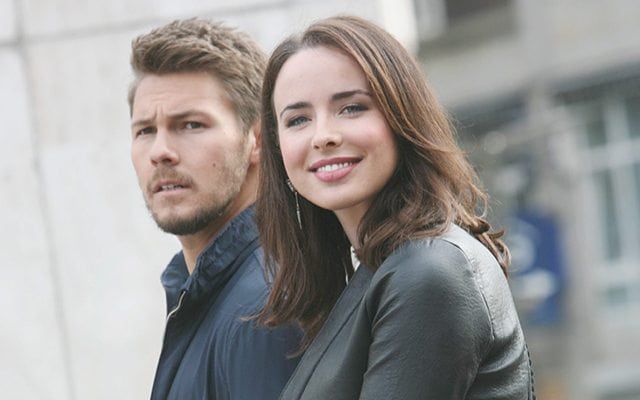 The Bold and the Beautiful Teasers and Spoilers for the Week of January 4-8, 2016

(SoapOperaNetwork.com) — A proposal could ruin the possibility of a reunion…

THIS WEEK ON: AS THE WORLD TURNS
Paul continues to work with Emily to keep Dusty and Meg apart from one another. Emily soon catches Paul paying Derek off to plant drugs on Dusty. When Emily threatens to tell Dusty about what he’s up to, Paul warns her that if she does, she loses all chances of getting Dusty for herself. Vienna and Henry report to Katie that Spencer has a locked suitcase in her suite. They immediately offer up to break into it to find out what she is hiding. Katie keeps Brad and Spencer detained while Henry and Vienna do what they need to do. After breaking open the suitcase, they discover loads of money. Alison is stunned to learn from Aaron that he’s filing for divorce.

Luke announces his running for the position of student government president. Kevin learns about it and approaches Luke on it. Casey rains on Luke’s parade by telling him he doesn’t stand a chancein winning because Kevin is way popular than he is.. Casey soon changes his tune when Kevin’s campaign manager, Mark makes nasty homophobic jokes about Luke. He decides to be Luke’s campaign manager but requests that Alison help him out. She goes to a meeting of Kevin and Mark’s and after hearing Mark make a decision to do some bashing of Luke, she leaves to report back, missing out on Kevin telling Mark that he won’t stoop to that level.

ANOTHER BRIDE FOR THE G-MAN?

Jack once again is offered his job back by Margo, to which he accepts. Jack goes to celebrate with Janet and it soon turns to the desire of making love. Unfortunately for them, they have no place to do so, which starts into a conversation about moving in together. Janet tells Jack she wants all or nothing. Jack later runs into Holden, who announces that he’s back together with Lily and that Carly is definitely out of the picture. Jack brings up how Janet suddenly wants to be his wife,but he’s not ready to commit to that yet. Liberty, meanwhile tells Janet not to waste her time holding out for Jack to drop on one knee for her. She later confronts Jack and tells him that either he is truly serious about her mother or he stays away from her. Janet is stunned by Liberty’s approach and rushes to talk to Jack. Jack, however tells Janet he suddenly wants to make her his wife and drops to one knee. Across town, Carly helps Lily who has a flat tire. On the drive home, Lily invites her for coffee and they talk about her quest to put Janet and Jack together. Lily tells her if she truly wants to have Jack in her life, to get a move on and get him back. Carly races to find Jack but interrupts his proposal to Janet. Janet upset at the sight of Carly there, bolts, leaving Jack angry at Carly for interrupting. Later that day, Holden runs into Carly and she fills him in on Jack and Janet. Holden points out that if Janet doesn’t accept his proposal, she still has a chance to get him back