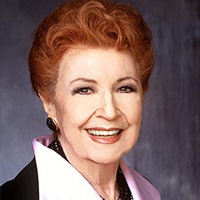 (SoapOperaNetwork.com) — “All My Children” loses one of the greats.

Eileen Herlie, a legend, passed away yesterday, October 8, 2008, at the age of 90. Herlie was born on March 8, 1918, in Glasgow, Scotland. Before starting her career on television, Herlie was an accomplished theatre and film actress. Herlie starred opposite Laurence Olivier in his 1948 film adaption of William Shakespeare’s “Hamlet,” and later reprised her role of Hamlet’s mother, Queen Gertrude, opposite Richard Burton on Broadway. Other plays Herlie appeared in include “The Matchmaker,” which was an early adaptation of “Hello Dolly,” and “Take Me Along,” opposite Jackie Gleason, which earned her a Tony Award nomination for Best Actress in a Musical in 1960. Herlie made the move to television in 1976 on the ABC daytime drama “All My Children,” where she played the irreplaceable Myrtle Fargate. The talented actress earned three Daytime Emmy nominations for the role and in the years to follow briefly crossed the role over to two other ABC soaps, “Loving” and “One Life to Live.” Myrtle was the ultimate mother figure and the voice of reason for many of the personalities that passed through the fictional Pennsylvania town; Ms. Fargate also gave many of these eccentric characters a place to live with her famous boarding house and a place to shop with her famous boutique. Herlie last appeared on “AMC” on May 23, 2008. Eileen Herlie married once but leaves behind no children. Herlie’s beloved character, Myrtle, will be greatly missed by her fictional friends and family, and the exceptional Herlie will be greatly missed by legions of “AMC” fans, her co-stars, and of course by her friends and family. Rest in Peace, Eileen. “All My Children” air Weekdays on ABC. Weeknights on SOAPnet. Check local listings.
Angela Rosa