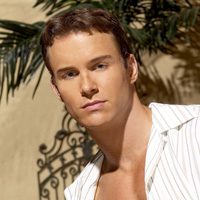 Former “Passions” hunks Galen Gering and Eric Martsolf are joining the cast of NBC’s “Days of Our Lives.”

Galen Gering played the very popular Luis Lopez-Fitzgerald on the now defunct soap, “Passions,” from it’s inception on NBC on July 5, 1999 to it’s cancellation on DirectTV on August 7, 2008. The 37 year-old actor has been cast in the role of an FBI Agent who comes to Salem working on a special case. Gering first airs on “DAYS” in late October. Word is that Gering’s character will be involved with Alison Sweeney’s character, Sami Brady.

Eric Martsolf, who played the easily manipulated Ethan Winthrop on “Passions” from 2002 until the shows cancellation, will join his former cast-mate on “DAYS” in mid-November. Martsolf will be playing a recast of Brady Black, the son of John Black (Drake Hogestyn). We last saw Brady Black on September 16, 2005, played by Kyle Lowder (currently Rick Forrester on “The Bold and the Beautiful”). Mr. Black is back to settle some unresolved issues with his ex-wife, Chloe Lane (Nadia Bjorlin).