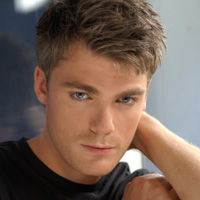 Branson is most known for playing the role of Jonathan Lavery on ABC’s “All My Children.” The Emmy-nominated actor played the role of reformed serial killer Jonathan from June, 2004 until “AMC” stopped calling him in for tapings in late 2007. In the spring of 2008, the show officially announced that Branson had been let go. Ironically enough, Branson’s first role on daytime was a day role on “GL” as a young Alan Spaulding in 2003.

Shayne Lewis is the son of “GL’s” biggest super couple Reva Shayne and Joshua Lewis (Kim Zimmer and Robert Newman). The character was last seen on August 16, 2004 played by played by Marty West. Shayne’s return will be a welcomed surprise for his family; the Lewis’ have recently learned that Shayne is missing in Afghanistan.