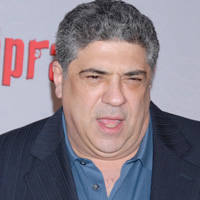 (SoapOperaNetwork.com) — After shooting a set of new promos for ABC Daytime last month, “Sopranos” star Vincent Pastore has agreed to mentor the people of Port Charles on what mob life is truly like.

According to EW.com‘s Abby West, Pastore will join the cast of ABC’s “General Hospital” in the guest-role of Maximus Giambetti, a well-known mobster who comes to Port Charles in order to reunite with sons Max (Derk Cheetwood) and Milo (Drew Cheetwood). Maximus comes to town thinking that his eldest son Max is the local crime lord, but soon learns that that is further from the truth.

The actor is most famous for his his long-running stint in HBO’s “The Sopranos,” where he played “Sal ‘Big Pussy’ Bonpensiero” from 1999-2007. He was also the voice of under-water creature “Luca” in the 2004 box-office smash “Shark Tale,” starring Will Smith, Angelina Jolie and Renée Zellweger. The film grossed over $160 million. He can next be seen in the film “Tricks of a Woman,” which is set for limited release on September 8.

Prior to joining “GH,” Pastore had a guest-role on ABC’s “One Life to Live” in 2003 as “Rack ’em up Ross,” a character that interacted with Melissa Archer’s Natalie Buchanan.