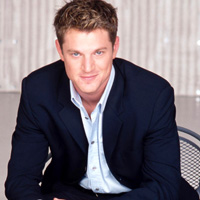 According to Michael Ausiello in his Ausiello Files column, Scott Holroyd, who portrayed Paul Ryan on CBS’ “As The World Turns” from 2001-2003, is joining the cast of the ABC primetime soap “Dirty Sexy Money” this fall. Holroyd will play the brother of Kiersten Warren’s Ellen Darling.

Currently, Ellen’s husband, Senator Patrick Darling (played by William Baldwin), is having an affair with transsexual Carmelita (played by real-life transsexual Candis Cayne), who mysteriously disappeared in the last episode of the shows first season.

Holroyd’s character is said to not be taking the news of Patrick’s sexual escapes as easy as his sister did.

Since leaving “World Turns,” Holroyd has appeared in such shows as “Law & Order: SVU,” “That 70’s Show,” “Ghost Whisperer” and “In Justice.” In November 2007, he married childhood friend Allison Munn.