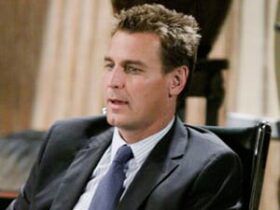 (SoapOperaNetwork.com) — A father’s protection lands him in hot water…

THIS WEEK ON:AS THE WORLD TURNS
When Barbara is threatened by Derek, Paul, having earlier refused James’ help, has a reluctant change of heart. James tells him that the money he needs is buried deep under Snyder farm soil, which makes Paul realize he was the one responsible for the contamination of their property. Alison continues preparing for her wedding to Aaron but gets sidetracked when she goes to the hospital and bumps into Chris. While there, Mrs. Ward tells the two she is unable to take care of her dog since she will be in an assisted living facility. Chris sneaks the dog to the Lakeview and Alison offers to help him but runs into Aaron. She quickly covers. Mike an Lily have another little make-out session but find themselves busted when Holden shows up unexpectedly. Henry
becomes concerned when he overhears Derek threatening someone on the phone. When he voices his concerns to both Bonnie and later Vienna, both women brush it off as unnecessary worry. Lucinda and Brian share a tender moment together.

Brad panics when Leo doesn’t emerge from the water. Racing to the pond, he pulls the unconscious boy out of the water to revive him. When that doesn’t work, Brad immediately calls 911 and takes off when they get there. Meanwhile, Janet tries hard to make peace with Jack, however, he’s still angry at her. Liberty, still shaken up, asks Janet to stay with her. Brad soon arrives back home and tells Janet to ignore the fact that he’s soaked. Dallas contacts Jack and tells him that Leo was found by the pond and has been rushed to the hospital. Jack quickly heads back to Brad and Katie’s for questioning. Katie immediately realizes that Brad has lied to Jack and once Jack has left, asks what he did. Brad admits that he was the one that threw Leo in the pond. Carly, in the meantime, questions if Parker is cleared of all accusations regarding Liberty. She soon learns from Dallas that someone attacked Leo. Brad later goes to the hospital to see Leo and tells him he’s sorry for what he did to him, unaware that Carly has heard everything. Back at Snyder farm, Jack finds Janet packing up her belongings. Before they can talk, Katie arrives and informs the two about what Brad has done. Janet quickly goes into protective mode when she begs Jack not to do anything to the father of her daughter. Jack, however, tells them all that he needs to do his job, and tells Brad he has an hour to come to the station to confess. Later, Brad gets word that Leo wants him to come to the hospital. When Brad and Katie arrive, they find Margo there to question him. When she leaves, Leo apologizes for what he did to Liberty but mentions he doesn’t remember too much of what happened.