Dorian doesn’t believe that Adriana will ever be able to forgive her. Rex demands a divorce, however Adriana has a plan to salvage the marriage. Adriana tells Rex that she needs time to revert back to the woman she used to be. Roxy visits Charlie in the hospital, where she tells him that she had only Rex’s best interests at heart. As Rex and Adriana part company, she plans to return to Paris. Before leaving for Europe, Adriana says good-bye to Marcie. A bitter Rex confronts Roxy and Charlie, and tells Roxy that he no longer has a mother. Charlie urges Roxy to tell Rex the identity of his real father, but Roxy believes it would only result in more pain. Rex encounters Gigi, who learns that Adriana has left Llanview. Gigi shocks Rex with the news that Adriana paid Brody to reunite with her and Shane. Natalie informs Roxy that Rex is shattered that Charlie isn’t his father.

The Main Event: Being a Princess Isn’t All It’s Cracked Up to Be

John, Antonio, and Talia listen to Ramsey and his houseguest from a surveillance van, but fail to find many clues as to her identity. Tina Roberts returns to Llanview as the Crown Princess of Mendorra. Todd is floored to see long-lost sister from his limo, and decides to trail her. Meanwhile, Tina and her dog named David Vickers instruct Jonas to drive them to Ramsey’s penthouse. As John listens to Tina and Ramsey’s conversation, he bolts for the penthouse after hearing gunshots. A fearful Tina runs for her life, with John McBain in hot pursuit. Jonas turns the tables on Tina when he shows his violent side. Todd moseys to the penthouse to discover what Tina is up to. He makes his way to the bedroom, and is stunned to find a very-much-alive Marty Saybrooke. Todd quickly formulates a new plan of action. Meanwhile, John arrives at Ramsey’s apartment to find Todd, but there is no sign of Ramsey’s houseguest. John is certain that Todd knows more than he is saying. Tina makes a hasty getaway when Jonas holds her at gunpoint. While hiding from Jonas in the park, Tina spots Sarah. A crazed Jonas holds Sarah and Cristian hostage. After escaping, a rattled Sarah tells Cristian that she thought she heard her mother call out her name.

Blair calls the cops on Todd when he attempts to justify his actions to Starr. Todd vows to destroy Michael and Marcie if he loses custody of Sam. Starr confides in Blair that she doesn’t feel ready to be a mother. Langston gives Dorian a shoulder to lean on when the Cramers don’t seem to appreciate her. Blair wishes she had a better handle on what Starr is feeling, but vows to stand by her daughter nonetheless. Cole reassures Starr. Addie deflects Blair’s questions when she asks about her father. Starr and Cole prepare for the future by taking Sam to the park. However, the toddler proves to be a handful, which plants seeds of doubt in Starr’s mind. Starr and Cole bump into Marcie, who Starr asks to help calm Sam down. While soothing Sam, Marcie accidentally adds to Starr’s insecurities about becoming a mother. Meanwhile, Starr makes a decision about her baby’s future…one that Cole may not agree with. Michael and Marcie grow closer.

As Jared and Charlie continue to bond, the Buchanans stew with anger. When Jared tries to apologize for his actions, Bo and Clint confront him. Jared assures Nigel that the Buchanans will never know of his involvement in the ruse. Renee is furious over Jared’s betrayal, and tears into him. Jared prevents Nigel from confessing. Natalie arrives at Asa’s mansion just as Jared is taken away in handcuffs, and learns that Clint and Bo had him arrested. Sarah leans on Cristian as she remembers Nash.

Monday: John, Talia, and Antonio look for the mystery woman. Tina places herself in danger. David insists Viki give Charlie a second chance.

Tuesday: Natalie makes a deal with Clint and Bo. Shane tells Brody a secret. Dorian is shocked to learn that she and David are now in-laws.

Wednesday: Sarah convinces Cristian to help her hide Tina. Blair is horrified to discover she has a new stepfather. Clint and Bo demand answers from Natalie and Jared. Carlotta learns the truth about Antonio and Talia.

Thursday: Todd uses Marty to his benefit. John gets closer to the truth. Cole is shocked by Starr’s decision.

Friday: Todd weaves a tangled web of lies. Marcie receives a rather tempting offer from Starr. John reminds Cole that he’s there for him.

GH PreVUE: Week of May 3 Edition 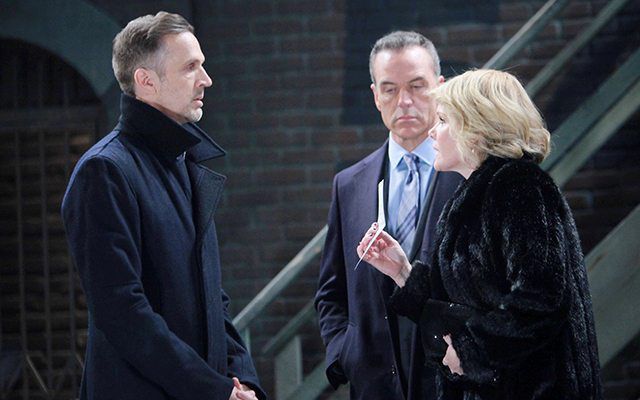