Greenlee throws herself into Aidan’s arms when he suddenly walks into Zach’s office. Aidan explains the details of his and Jake’s escape to Greenlee, Ryan, Zach and Kendall. Annie simmers when she spots Ryan comforting Greenlee. Jake describes the harsh realities of his life in Darfur to Greenlee but explains that he needs to finish his work there. Greenlee’s refusal to help does little to deter Jake’s will to make an unauthorized exit out of the hospital. Greenlee finds a collapsed Jake. Aidan explains to Greenlee that no one survives a war completely unscathed. Greenlee is clearly unsettled as Aidan brings up the topic of them starting a family. Kendall advices Greenlee to share her true feelings about parenthood with Aidan. Greenlee informs Aidan that she never wants to be a mother. Aidan questions why Greenlee was once so desperate to have Ryan’s child but refuses to even consider having his.

The risks Aidan took on his mission to Darfur registering with him, Zach is finally able to put the past events behind him and let go of his anger. Erica is greatly relieved to learn that everything is fine between Zach and Kendall when they come to pay her a visit. Jack and Kendall’s phones get mixed up as they’re leaving the prison. Thinking she’s calling Kendall, Erica inadvertently lets Jack know about Kendall and Aidan tryst. Erica has no choice but to confirm her slip but urges Jack not to reveal anything to Greenlee.

Amanda encourages a dejected Annie to fight for Ryan. Ryan surprises Annie with a picnic in the stables and apologizes for forgetting their anniversary. Annie’s emotions get the best of her as she confronts Ryan about seeing him with Greenlee the night before. Ryan’s memories of Annie begin to flood back as she turns to walk away from him. Annie is finally convinced that Ryan is telling her the truth. Ryan and Annie make love but Ryan is clearly conflicted about his feelings. Ryan confesses to Kendall that although he now remembers Annie, he doesn’t remember loving her. Upon overhearing that tidbit, a hurt Annie decides not to reveal to Ryan that his vasectomy never took.

THE WHEEL OF KARMA

Dixie continues to taunt Adam. Dixie’s admission about her own mistakes does little to convince Adam to change his mind about keeping Tad in the dark. Krystal questions what Tad would do if he found Kate living with a family that she loves and that loves her. Dixie realizes she can still feel love as she experiences anguish over not being able to reach out to JR. JR works to have his father committed after he admits that Dixie is haunting him. Tad hits a roadblock in his search for Kate. Stuart believes Adam may really be seeing Dixie but JR won’t hear of it. Dixie is greatly amused as Adam is locked up in the same ward of Oak Haven that he once unjustly had her committed to.

OTHER HAPPENINGS IN PINE VALLEY…

– Krystal assures Jesse that Cassandra will soon become more comfortable with him.

– Richie shows his true colors when Babe confronts him about what he did to JR.

– Babe disguises herself as a hooker after forming a plan to prove that Richie set JR up.

– Frankie and Jake immediately form a bond; Frankie urges Jake not to push away his family.

– After Jesse leaves, Cassandra answers the door to Robert, who is clearly up to no good

Monday: Annie is more determined than ever to keep Ryan. An unknowing Angie tells Jesse to stop looking for trouble where none exists. Dixie warns Adam that his time is running out.

Tuesday: Jesse is surprised by an unexpected visit from his old friend Greg Nelson. Adam is chilled when Dixie points out that his actions have consequences. Aidan and Greenlee reach out to each other.

Wednesday: Jesse surprises Angie by getting Ne-Yo to perform at their wedding. Aidan tells Greenlee how he feels about them. Jack lets Aidan and Kendall’s secret out slip in front of Greenlee.

Thursday: A fiery Greenlee confronts Kendall, Aidan and Zach. Dixie watches over her family and friends at Angie and Jesse’s reception. Jesse faces off with Robert as Angie arrives.

Friday: The wedding takes an unexpected turn. Aidan wishes he could turn back time for him and Greenlee. Dixie watches with horror at the unexpected turn of events.

OLTL Alerts: Week of May 10 Edition 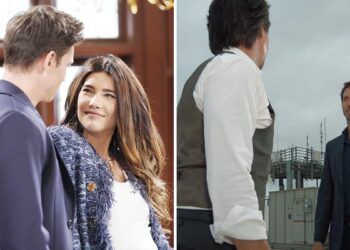 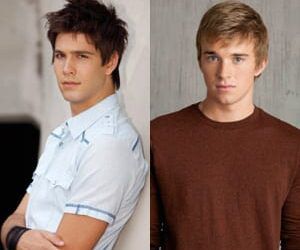