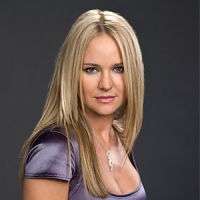 While Billy and Nick discuss how damaging Adam's testimony will be for Sharon, a cocky Adam, in the visitor's room, tells Vance that he's going to make the jury see that Sharon didn't kill Skye.

During a business lunch, Sofia and Neil discuss how what happened between them was only a one time thing and that it will never happen again. Malcolm suddenly appears to tell them that they have an opening at the church to be married. When he tells them that the church is First United, both Sofia and Neil balk that it's a mistake to have the wedding where Cane was killed.

DA Walsh is ready to put Adam on the stand. He begins by listing all of Adam's past crimes and asks on the Newman Hedge Fund. Adam admits to ending things with Skye when he and Sharon fell in love again. Walsh wants to know how far Adam would go to have Skye out of his life; did he send Sharon to Hawaii to kill Skye. Adam tries his best to talk on the video he saw but is stopped dead in his tracks. Once they have him alone, Billy and Nick question him on the video.

Jill and Colin arrive at the coffee house and find themselves talking to Daniel and Lily. When Lily leaves, Colin starts to shed light on how he understands what Lily is going through, pointing out that she needs family and friends to comfort and surround her. Jill realizes that Colin is talking on the loss of his children and the two of them have a heart-to-heart.

Chloe and Gloria are confronted by Jana, who wants to know why Chloe's trying to get her fired from her job. As the twon women bicker, Gloria secretly swipes her key. The two soon start digging through Jana's apartment for anything suspicious, but when they discover Jana is back at the Abbott house, Gloria uses a stall tactic. When it doesn't work, Chloe rushes off with the pregancy pillow and is caught by Billy, wondering what she is up to.

Malcolm talks to Lily about having his wedding at First United; he wants to know if she'd be comfortable being there. She tells Malcolm she needs to think about it. She soon heads to see her therapist, where she discusses the loss of Cane and how she wished she had heard his last words to her on the night he died. When her session is over, she calls Neil and asks if Malcolm is still with him. She tells them both that she'll be at the wedding at the church.

Vance, fearing that Sharon won't win the case, tells her that he thinks she should plead to a lesser charge. Adam tells Vance that he's not helpng Sharon at all by asking her to admit guilt to something she didn't do. A distraught Sharon can't believe she'll never see her kids again. When Adam and Sharon are left alone, Adam tells her that he's going to help her escape.

Phyllis returns from Thailand, many memory cards in hand. She requests Malcolm's help in trying to pull whatever data off of one of the memory cards that could help clear Sharon.