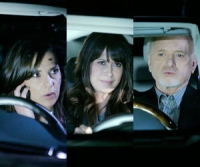 (SoapOperaNetwork.com) — A look at what’s happening on “General Hospital” during the week of March 14, 2011.

Carly recruits Luke & Ethan to help neutralize Jax; meanwhile, Alexis calls Jax out on Monday, March 14. Carly & Alexis team up to get Luke & Ethan out of a jam. Carly races to get to the hospital after an alarming call from Jax. On Friday, March 15, Josslyn is diagnosed with Stage 5 kidney cancer. Johnny tries to talk sense into Lisa. On Wednesday, March 16, Robin & Lisa are aghast as Johnny tells them about the special treasure hunt he has set up just for them. The hunt turns into a chase after one of the girls finds the sought after prize. Abby calls Jason after learning what Michael is up to. Dante once again holds Michael’s fate in his hands on Thursday, March 17.

The Inside Story: Rise & Fall
Elizabeth threatens Nikolas after finding him with Brook Lynn. On Wednesday, March 16, news of Lucky’s marriage plans affects Elizabeth deeply. Lucky is angered by Luke’s refusal to stand with him. Luke has a change of heart and races to get to Lucky & Siobhan’s wedding. Meanwhile, a frazzled Elizabeth returns home where she finds the paternity test results. Barely getting a moment to digest the news that Lucky is really Aiden’s father on Thursday, March 17, Elizabeth realizes that Jake is missing & the front door is wide open. Robin, Lisa, Carly, Jason & Michael, Sonny & Brenda, Theo & Suzanne, Sam, and Luke are all in states of turmoil and on the road when a tragic event occurs. On Friday, March 18, family & friends race to the hospital where Jake lies in critical condition, the victim of a hit-and-run.

A Closer Look: War & Peace
Brenda’s survival remains in question on Monday, March 14. Sonny & Brenda’s friends and family converge at the hospital. Theo escapes. Jason makes a vow. Dante gets a warning. Jason confronts Johnny after discovering that he was the one behind the car bomb. Johnny gives Jason info to help in his search for Theo. Sonny is consumed with making Theo pay. On Wednesday, March 16, a recovering Brenda is touched by Sonny’s surprise. The Corinthos take off for their honeymoon. Theo & Suzanne take off in search of their grandchild. Abby gives Sam valuable information. Following the lead on Theo, Sam is hit with a severe headache – while driving! Brenda dreams of her child.