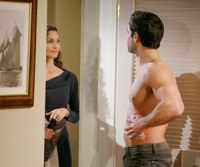 (SoapOperaNetwork.com) — A look at what’s happening on “All My Children” during the week of March 28, 2011.

Frankie’s biological clock is ticking on Monday, March 28, but is Randi’s? Colby & Asher have a misunderstanding. Despite receiving a harsh rejection, Caleb tells Erica that he’ll wait for her. Erica finds Jack & Krystal in a compromising position on Tuesday, March 29. Jack agrees to Erica’s proposition after she opens up to him. Caleb learns Jack & Erica have left to elope. Bianca gets great news about the custody case. On Wednesday, March 30, Marissa is affected when she realizes JR is behind Reese’s change of heart. Amanda calls Cara out on Friday, April 1. Jake & Amanda seem to be in a good place. Tad cheers Cara up.

The Inside Story: Gone Too Soon
Jake & Tad throw a party for Angie. The brothers give Angie & Jesse a touching present. Angie reveals how scared she really is on Monday, March 28. Jesse and the other guests do their best to reassure her. Jesse & Angie take a walk down memory lane at the Justice of the Peace parlor where they first got married. Angie realizes something is very wrong. Unable to get help on the scene, Jesse takes action as Angie goes into labor. On Wednesday, March 30, a crushed Jesse delivers his stillborn daughter, Ellie, just as Brot arrives on the scene. Jesse makes a split-second decision when he hears an abandoned newborn crying in Brot’s patrol car. Brot goes along with Jesse’s story and the pair introduce a happy Angie to “her” baby. The baby’s young mother, Maya, meanwhile turns up at PVH seeking care. After securing Angie at the hospital with baby Lucy, Jesse returns to Ellie’s unmarked grave and begs his little girl to forgive him for what he’s done.

A Closer Look: Every Step You Take
Despite themselves, Kendall & Griffin end up having a good time on their “date” on Monday, March 28. On their “date”, Ricky loses his cool when Cara balks at his not so subtle suggestion. Tad breaks up the tense scene. Ricky watches Kendall & Griffin. Kendall explains to Greenlee that it’s easy being around Griffin because he knows she just needs a friend as Griffin insists to Cara that that is all they are. On Thursday, March 31, Griffin & Kendall both grapple with a bit of disappointment following Kendall’s announcement that she is beginning work on freeing the funds for the MC expansion – which will allow the doctor to return to the field. Kendall & Griffin discuss the recent awkwardness between them. Ricky extends an invite to Kendall and the boys. News of Kendall expediting the sale of the casino does nothing to douse Ricky’s seduction plans much to Diana’s chagrin.