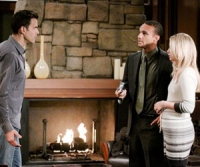 (SoapOperaNetwork.com) — A look at what's happening on "All My Children" during the week of March 14, 2011.

On Monday, March 14, Angie's long-awaited return is celebrated. Jesse & Angie choose godparents for the baby. Tad & Cara share a close moment. Krystal is moved by Cara's plea on Thursday, March 17. On Wednesday, March 16, JR offers Jake's wife a position at his company; meanwhile, Amanda's husband makes a passionate plea that his ex-be allowed to retain her position at PVH. Kendall, Bianca & Marissa bond. Bianca & JR face-off over Marissa. Griffin gives Kendall a clean bill of health. Cara learns the real reason for Griffin's trip. Ricky plots to undo Griffin. Griffin prepares to meet with the casino owners. On Friday, March 18, Kendall informs the surprised doc that she'll be joining him on his travels.

The Inside Story: Mommy Dearest
Madison comes clean to an ultimately understanding Ryan. Greenlee feigns shock when Ryan reveals Madison is carrying his child. Later at Fusion, tensions rise when Greenlee objects to giving Madison the credit she deserves. Ryan is uncomfortable with Madison's living arrangements. On Tuesday, March 15, Greenlee & Ryan discuss what his role will be in the baby's life. Madison expresses her appreciation to Scott after an encounter with a pushy Ryan. Broke & back in Pine Valley, Annie attacks a man that she mistakes for Scott. Brot calls Ryan after speaking with the man. Emma calls Madison and reveals that her mom took her to the man in the park's room. Emma makes a break for it with Annie out of sight. Annie flips out when Ryan shows up at her room – with Greenlee! On Friday, March 18, JR convinces a briefly lucid Annie that she need to get help. Ryan finds Emma, who rages after overhearing where her mom has been taken.

A Closer Look: Business & Pleasure
JR tells Liza that Colby does not need a mother like her in her life. Erica & Ava's words give Colby the confidence to continue her blog. Liza's job is on the line. On Wednesday, March 16, David tells Liza that they can rise from the ashes together better than ever if she joins forces with him. David gives Liza time to think after planting a kiss on her. Liza unleashes on the so-called moral people of Pine Valley. Colby catches Liza's drunken antics on video & sends it straight to the web. David tries to reestablish himself. Griffin puts in a good word for David with the medical board. Will JR agree to do the same for AJ's grandpa on Friday, March 18? David realizes he has a long road ahead with Marissa.