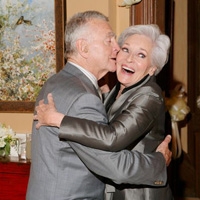 (SoapOperaNetwork) — Tad Martin’s (Michael E. Knight) next marriage is set to be Pine Valley’s biggest of the year; but will the Cad’s parents impede his big plans?

Ray MacDonnell and Lee Meriwether are returning to “All My Children” for a guest appearance this March.

MacDonnell and Meriwether, of course, portray the husband and wife duo of Dr. Joe Martin and Ruth Martin on “AMC”. MacDonnell, who will be 83-years old this March, is one of “AMC’s” original cast members. He debuted on the ABC soap on January 5, 1970. The actor who received a Lifetime Achievement Daytime Emmy award in 2004 last appeared on “AMC” in January 2010. MacDonnell officially retired from the contract role in the wake of “AMC” moving production from New York to California in late 2009. Meriwether, also known as Miss America 1955 and Catwoman in the 1966 adaptation of “Batman”, debuted in the role of the Martin matriarch Ruth in 1996 (taking over for the fabulous Mary Fickett). 75-year old Meriwether’s last appearance on “AMC” was in June of 2010.

The Martin’s return to Pine Valley on Tuesday, March 8 and will stick around through Wednesday, March 9. In true soap fashion, the pair will have to deal with the complicated situation of their much-married son Tad fixing to make their other son’s (Ricky Paull Goldin) ex-wife, Dr. Cara Castillo (Lindsay Hartley), his next bride. Between suspicious immigration agents, none-too-thrilled potential in-laws, and confused ex’s – can this fraudulent pair beat the odds and make it official? Stay tuned to “AMC” during the week of March 7!