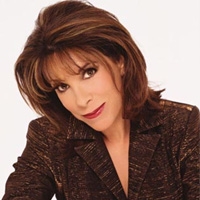 (SoapOperaNetwork.com) — If you happen to be in the Los Angeles area at some point this upcoming weekend, you might want to stop by the Barnsdall Gallery Theatre where "The Young and the Restless'" Kate Linder (Esther) will be performing "The Vagina Monologues" alongside Alison Arngrim ("Little House on the Prairie") and Diane Amos (best known as "The Pinesol Lady").

Considered “one of the most important pieces of political theatre” by the NY Times, "The Vagina Monologues" has been a focal point in the V-Day activists movement, which was created to generate a broader awareness in the fight to stop violence against women and girls by way of raising money and revitalizing the spirit of existing anti-violence organizations.

"I am so honored to be a part of this production," Linder said in an interview on the "Y&R" official website about her participation in the event. "It really has been done in a way that hasn't been seen before. The fourth wall is down and it is very interactive."

The shows are scheduled as follows: