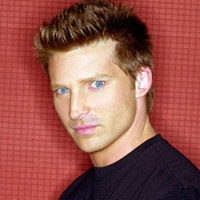 Jason and Sam discuss their suspicions of Theo with Dante. They start Spinelli on a 11th hour DNA search for the Balkan’s identity. Robin asks Patrick to cover for her at the hospital while she helps Brenda prepare for the wedding. Her only patient in need is Theo Hoffman. The Balkan sets out his “wedding day revenge,” now only one day away. Brenda preps for her wedding with Robin, Kristina and Molly when Carly knocks on her door. Sonny arranges to “kidnap” Carly so that she does not interfere at the ceremony.

Lulu helps short-handed Luke run Kelly’s Diner for the day. But Luke is in a bigger bind, as he fears for his daughter’s heartbreak in light of her reconciliation with Dante and Carly’s bombshell reveal at the wedding.

Lucky is shot in the head after a gunfight.