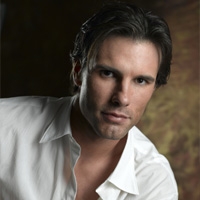 (SoapOperaNetwork.com) — As previously reported, Austin Peck is joining the cast of ABC's "One Life to Live" as a character named Rick, who is described as the type of person the show "doesn't really have much of," according to SOAPnet.com. Now Soap Opera Network has your first look at Peck from his first day on the set.

While a first airdate has not been set, sources tell us we can expect to see Peck and his character on screen in either late March or early April.

What do you think? Let us know in the comments below.