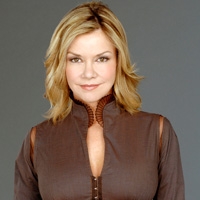 Tad starts sharing his “engagement” news and informs Krystal and Opal of how he is going to save Cara. Krystal appears to be having a harder time than she thought with Tad’s engagement. Upset over the fact Tad is marrying Cara, Krystal confides in Jackson that she’s having a harder time with it than she should. Griffin thanks Tad for what he’s doing but warns them to be on the same page otherwise they’ll get caught. Griffin meets up with Jake and says that there can’t be any feelings between him and Cara otherwise that will ruin the engagement facade. Amanda tells Jake she called the immigration agent to try and help since she felt so guilty for disliking Cara.

Liza tries to explain exactly what happened between her and Damon to Colby. Asher offers Colby a shoulder to cry on and she clings to him. Asher admits he already knew the truth.

Jackson confronts Erica over the issues that are affecting their relationship. Erica realizes she needs to resign from Cortlandt Electronics.