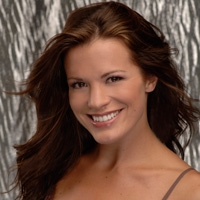 (SoapOperaNetwork.com) — A look at what’s happening on “All My Children” during the week of February 7, 2011.

Jake and Cara share an intense moment. Cara comes clean to Jake about the real reason she had to leave him in Sudan on Tuesday, February 8. Tad gives Liza advice. On Wednesday, February 9, Scott looks out for Madison’s best interest despite Greenlee’s warning. Greenlee accidentally blurts out the truth about Madison’s condition to Ryan after a series of awkward run-in’s on Thursday, February 10. On Friday, February 11, “AMC” will re-air Jackson and Erica’s 2005 Boca Raton wedding.

The Inside Story: I Didn’t Start the Fire
On Monday, February 7, Annie arrives on the scene with a head-wound as JR and Dr. Burke are discussing how to help her. JR is puzzled by Annie’s behavior. Colby manages to send out an S.O.S. moments before Annie arrives back on the scene. JR and Annie’s odd exchange gives Asher the clue he needs to find Colby. JR realizes that Annie needs more help than he can provide after Asher enlightens him. Tad and JR realize Annie was behind the crash of Kendall’s ambulance. JR begs Tad to let him handle the situation. Tad puts a backup plan in motion in case Annie refuses to voluntarily commit herself. Annie tells “Marissa” she is getting married tonight. JR’s discussion with Annie is cut short by his arrest. Annie finds the commitment papers. Deducing that she is behind the papers, Annie lures Marissa to the attic where all hell breaks lose on Thursday, February 10.

A Closer Look: The Day After Tomorrow
Griffin takes steps to make good on his promise to Kendall. David guides Griffin through the difficult roadside surgery from the hospital after being granted limited medical privileges. Kendall has a vision of Zach. David declares the surgery a success. Kendall confronts Erica about the shooting after waking up on Tuesday, February 8. David tells Erica she can end Kendall’s problems by doing one more thing for him. Jack flips out when he learns about the meeting Erica set up for David. Kendall confides in Ricky about her vision in the ambulance. On Wednesday, February 9, a pardoned David tells Greenlee and Ryan that he wants to be a better man & a physician again. A jealous Griffin confronts Ricky about his relationship with Kendall. Later, Ricky places a call and assures the person on the other end that his feelings for Kendall will not impede his mission. Jack & Erica sidestep Ricky’s question about their nuptials. Caleb tries to stay away from the Kane women.