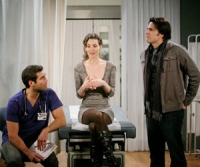 (SoapOperaNetwork.com) — A look at what's happening on "All My Children" during the week of February 28, 2011.

Will Colby regret taking her rage viral? On Tuesday, March 1, following several interesting discoveries, Jack asks Erica why he should trust her. Erica faces off with Krystal. Jack tells Erica they need to go on hiatus. Ryan's presence during several pivotal baby moments prompts Madison to reconsider her decision; Greenlee, meanwhile, does the same. On Thursday, March 3, Greenlee tells David she'll get him the one thing he wants most in the world if he gets Ryan the one thing that he does. Emma contacts Madison again. Marissa & Bianca disagree on how to handle things. On Friday, March 4, thrown by Reese's actions concerning the kids, Bianca tells Marissa that the battle is on.

The Inside Story: Paper Trail
On Monday, February 28, Kendall notices something is off about the letter after returning. Ricky gets support with his deception from an unsuspecting Griffin. Kendall questions why Ricky is pressing her about her relationship with Zach. Diane confronts Griffin. Ricky & Griffin face off. Griffin is concerned that Kendall's preoccupation with Zach is impeding her recovery. Kendall confides in Bianca. Ricky insists to Kendall that she's overreacting about the letter. Kendall is determined to put the pieces together. Griffin begins to take her concerns to heart when she asks him to decrease the dosage of her medication to prevent any further issues with her memory. Diane warns Ricky that the evidence has to be found immediately. Ricky gets Kendall to take him to the yacht after realizing its significance on Friday, March 4.

A Closer Look: Mother Load
Jake continues to be troubled by what Amanda has done. On Tuesday, March 1, Tad's attempt to get to know Cara better comes to an abrupt end when he brings up the topic of his brother. Jake fills Tad in on why he fell in love with Cara. With the feds keeping a close eye on them, Tad & Cara gather the family and put on a show. Krystal has a serious talk with Tad about what he's doing. Griffin opens up to Tad about his sister. On Thursday, March 3, Tad introduces himself to Cara's fuming mother, Leticia (Elena Campbell-Martinez). Kendall overhears Cara & Griffin discussing their latest secret. Leticia tells Cara that they're going back to Mexico. Tad fills Griffin in on Leticia's plans. As Amanda watches from the distance, Cara gives Jake back his ring.