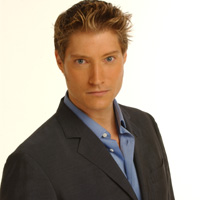 (SoapOperaNetwork.com) — Sean Kanan is heading to CBS’ “The Young and the Restless” as Deacon Sharpe is resurrected on daytime’s number one drama series.

Soap Opera Network has learned that Kanan, last seen as Adam McNeil in the independent movie “Jack Rio” in 2008, is returning to daytime television beginning Friday, July 10 when he brings his character Deacon Sharpe from CBS’ “The Bold and the Beautiful” to Genoa City and “Y&R.” The actor last appeared as Deacon in 2005 on “B&B.”

According to sources, Kanan’s first scenes are with Amelia Heinle, who portrays Victoria Newman on the drama series.

At this time it is unclear if the actor has signed a contract with the soap or if the character is returning as part of the Art Heist storyline that is about to heat up during the summer months.

With Deacon in town, what does this all mean for Amber Moore (Adrienne Frantz)? Deacon and Amber have a history dating back to 2000 on “B&B” while Amber was married to Rick Forrester (then played by Justin Torkildsen). Tune in to find out!